AFTER a journey of more than 12 000km to war-torn Somalia, the Kingsley Holgate explorer team is back home in Zululand after successfully reaching Ras Xaafun, the most easterly point of the African continent.

‘It was extremely dangerous,’ said a relieved Kingsley.

‘The threat of our team being attacked by Al Shabaab, or kidnapped and held for ransom, was very real.

‘We had to keep the expedition’s destination secret, to the extent that when we left South Africa, we created a false story that we were only going as far as the ancient walled city of Harar in Ethiopia.’ After a challenging eight-country route, they arrived in the volatile region amid escalating tensions in Ethiopia, ongoing troubles in Yemen and the Gulf of Aden, looming presidential elections in the self-proclaimed, but unrecognised state of Somaliland, and just as a devastating bomb attack in Mogadishu killed 400 people.

While the Holgate team were heading to Ras Xaafun, US military launched a drone attack against an IS base in northern Puntland, killing six suspected IS terrorists. The expedition picks its way to the coast

Protected by a contingent of 25 heavily-armed troops in vehicles mounted with light machine guns, the five-man expedition in their specially-equipped Land Rover Discoveries had to travel at high speed to avoid detection on a dangerous journey across desert and difficult mountainous terrain to reach the remote, rock-strewn headland.

‘After six adventure-filled weeks, imagine our sense of relief as we attached a commemorative plaque of Peace and Goodwill written in Somali and English to the crumbling remains of the old Italian-built lighthouse. ‘It was a solemn moment for all of us, emptying the expedition’s Zulu calabash of Kosi Bay seawater onto a small cairn of stones that we hurriedly built, and which now marks the most easterly point of Africa.’

The team, still on high alert, returned at speed through the desert, arriving in the Puntland capital of Garowe in the dark.

Minutes later, a contingent of agitated high-ranking security officials demanded entry to their compound and accused the expedition of either being spies or illegally prospecting for minerals, threatening them with arrest.

‘It was a scary situation,’ recalled Kingsley. ‘They searched our vehicles and checked they weren’t bullet-proofed.

‘It was largely thanks to our expedition Scroll of Peace and Goodwill, with its messages of support from across Africa and previous expedition images, including the team with Nelson Mandela and other VIPs, that we were released.

The Minister of Security turned out to be a friendly chap and even endorsed the Scroll with the words, ‘You are very brave to visit Somalia at this time’.

Later, our facilitator told us that he’d kept our visit as confidential as possible to reduce the risk. A ‘Mashozi rite to sight’ clinic assisting patients along the way

The Holgate team has now achieved a long-held goal to explore every country in Africa, conducting Land Rover-supported humanitarian work on each journey that has benefitted millions of people.

‘Both en route and in Somalia, we distributed lifesaving mosquito nets to mothers and children in areas where malaria is rife, provided reading glasses to poor-sighted elderly villagers and in drought-ravaged communities, handed over LifeStraw units that each provide 30 000 litres of filtered drinking water to needy families,’ said Ross.

With this expedition the team have achieved a world-first in reaching the seven extreme geographic points of Africa. ‘It’s a lifelong dream come true,’ said Kingsley. 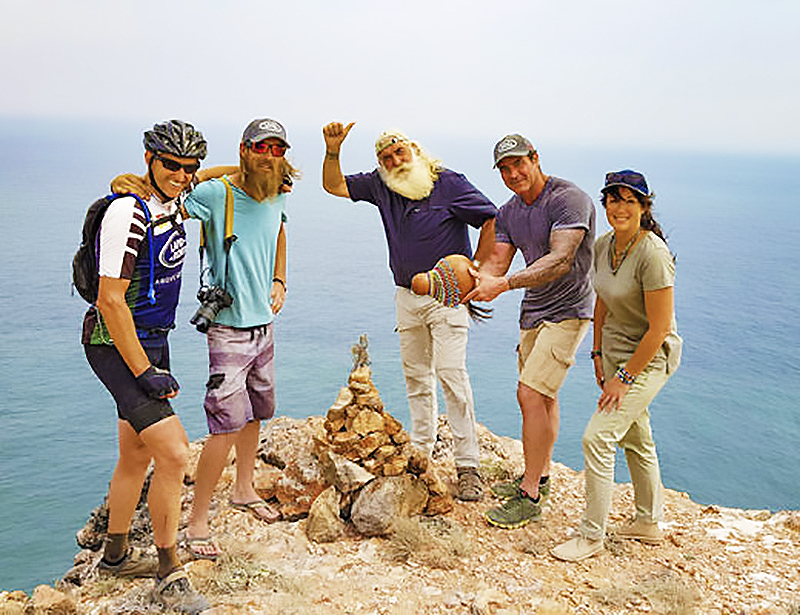 ‘Yes, we must be crazy to travel to one of the most dangerous regions in the world at this time, but as always, we were touched by the strength of the human spirit and the goodness of ordinary people we met along the way.

‘I pay tribute to our extremely brave team, our expedition partners for their faith in us, and the wonderful people who also risked their lives to help us reach Ras Xaafun safely.

‘We had a window of opportunity and took our chances. The ‘Zen of travel’ was most definitely on our side.’