I first learned to construct nomadic huts with my grandmother in the summer holidays – spent, whether I liked or not, living in Dayniile, near Mogadishu. Being a Mogadishu girl, living in a comfortable villa, I hated it at first so my father sent, as a surprise, a tiny battery-run TV, which transformed our evenings at the nomadic camp.

Although we never planned to live like that, later, as it happened, we became refugees and ended up internally displaced in what would have otherwise seemed like barren landscapes. But thanks to my childhood experiences we were able to construct houses on our own.

We knew where to source the material, get water and even medicinal flora: we made mats of fibre and used dried and shaped acacia roots to serve as pillars. This was before aid arrived and plastic tents invaded the region. Unlike the plastic tents, which are hot during the day and cold at night, the nomadic huts are suited to the arid and hot climate: they are cool during the day and warm during the night, thanks to their natural ventilation system. It is eminently uplifting to construct your home as a way of dealing with loss in the emergency of war.

Along with the ongoing conflict, Somalis also face an environmental emergency thanks to deforestation. People are consuming their future by burning the same acacia trees they need for their homes into charcoal for the international trade. These trees take years to regenerate. Soon, it might be that people won’t have any other option than to wait for plastic tents from Europe.

I feel proud that the nomadic hut is, in its entirety, a result of female ingenuity and collective effort. It is a common practice that women support each other through thick and thin. But making the house is fun. Women sing and recite poems during its construction. A bride-to-be making her marital hut invites female friends and relatives and, as a reward for their hard work, offers food and drinks; but if she fails to do so they will sing about her laziness or, even worse, her stinginess.

One of my favourite objects happens to be the interior mat of the hut, the kebed, an insulating and decorative mat. A mother might help her daughter weave her bridal kebed and she may also weave a secret message to her daughter and her son-in-law through a combination of intricate patterns and colours.

The experience of building huts has helped me appreciate Somali architecture. Through my archaeological work, I have come across all sorts of human dwellings, everything from rock shelters inhabited thousands of years ago, often adorned with the most spectacular paintings, to dry-stone towns on the Somali coast, and to the modern architecture in cities like Hargeisa. Mogadishu features the Shirazi Persian architecture of the Swahili houses and mosques.

However, the ongoing war has caused a lot of destruction. The beautiful Islamic buildings with minarets, arches and domes, including Omani, Egyptian and Ottoman architecture, need protection and preservation. In Berbera, Somaliland, one can still enjoy some beautiful Ottoman architecture. During the European colonial era, impressive structures were erected too. Mogadishu has a cathedral built during Italian times, and hosts a number of art deco houses. 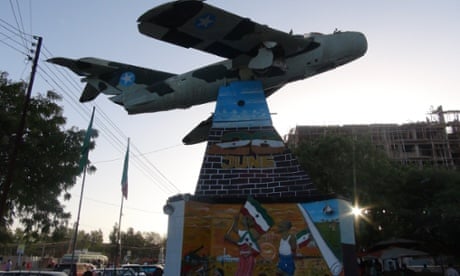 The insider’s cultural guide to Hargeisa: ‘the mother of Somali arts‘

There is what could be called anti-colonial architecture too. My grandmother used to talk about Sayyid Mohammed Abdullah Hassan, the Somali liberation hero of the Daraawiish (Dervish) movement; she used to recite his poetry to my siblings and me. What I didn’t know as a child, though, was that the place she called Taleh, the sheikh’s residence, was a significant maze-like fortress. The colonial British were unable to penetrate it and had to resort to air bombardment.

Somalis seem to be experts in resurrection through time. After decades of peace Hargeisa, in Somaliland, is expanding and its modern architecture is booming. As I write, I am sitting admiring the hotel near my house in the city. It is inspired by the Arabian style of curvy angles and arches and big courtyards. I can’t believe that this beautiful hotel and many more have risen out of the war zone I saw just two decades ago. I also can’t believe that the ambitious owner of the hotel actually converted what was a barren hill into a lovely garden.

Seeing towns like Hargeisa gives me hope for places like Mogadishu which, in times of relative calm, is enjoying new construction and reconstruction projects. What will be the future for Somali architectural heritage? Only time will tell.

Dr. Sada Mire (born 1977) is a Somali archaeologist. She is the only active archaeologist working in Somaliland, a region in northern Somalia[1] where she became the Director of Antiquities in 2007.[2] Originally from the Somali capital of Mogadishu, Mire fled the ountry at the start of the civil war at the age of 14. She then traveled to Sweden seeking asylum. She has since returned to the Horn of Africa as an archaeologist, making some notable discoveries.[3]